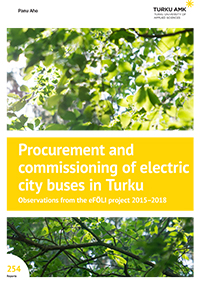 During the years 2015–2017, the City of Turku commissioned a fleet of six fully electric Linkker city buses operating on an opportunity charging scheme. The two fast charging stations are located at the end-of-line stops of the route being trafficked: Turku harbor and Turku airport. In practical operation, the active charging durations have been in the order of three minutes (median duration).

Overall, the e-bus system as a whole is very competitive against diesel buses in terms of energy consumption. In a standardized dynamometer test, the Linkker 13LE e-bus measured in at 0.825 kWh / km in the Braunschweig Cycle at 3000 kg payload. Meanwhile, real-world measurement results from the Turku route 1 suggest a mean charger-to-vehicle electricity consumption of 0.83–0.95 kWh / km depending on the vehicle. Various losses and the operation of diesel fuel heater add significant overhead to the total system-level energy consumption, which is approximated to be in the range of 1.3 – 1.5 kWh / km between the vehicles. On a long enough averaging window, ambient temperature is an important predictor of the energy consumption, but on the short term, other factors such as route elevation characteristics traffic congestion, and driver behavior become predominant.

This report highlights some of the most important aspects of introducing a modern opportunity charging e-bus system to operational urban mass transit system. It is the author’s hope that the documented progress in Turku may help other cities as well with their endeavors towards electrification of public transportation and, in this, provides useful insights to be used by decision makers, industry and scholars alike.