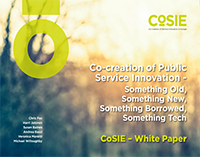 Various ‘co-processes’ (co-initiation, co-design, co-production, co-implementation) are enthusiastically celebrated initiatives for improving public services. While there are many similarities between the concepts, the distinctions lie in the role of key stakeholders, particularly citizens and their representatives.

There is an extensive amount of research literature which shows that co-creation has been justified on several grounds, of which the most alluring are perhaps that 1) co-creation conceives service users as active partners rather than passive service users and that 2) co-creation promotes collaborative relationships between service providers and users. However, many studies have also concluded that co-creation is a complex process.

This paper argues that the complexity of public innovation cannot be ‘solved’, but rather must be ‘managed’ in collaborative ways. Innovation is not seen as something that can be created in isolation in ‘laboratory settings’ and then delivered to the users/citizens. Instead, the paper’s rationale is based on the premises that public service innovations should be co-created with citizens and relevant stakeholders. Theoretically, the paper draws on public service logic and service-dominant logic for value (co)creation.

This paper draws together ideas about co-creation, social innovation, social investment and individual and collective values that underpin the CoSIE project and shows the relationship between these concepts and how they can support innovation in public services. p>